Shaheed Diwas, also known as Martyrs’ Day, honors the valor and commitment of those who sacrificed their lives for the country. On this day, freedom fighters Bhagat Singh, Shivaram Rajguru, and Sukhdev Thapar were hanged to death by the British rulers of India in 1931.

Shaheed Diwas is observed on a number of occasions in India. Besides March 23, the day Mahatma Gandhi was assassinated, January 30, is also marked as Shaheed Diwas.

Today, people from all walks of life pay their respects to the heroes and take inspiration from their struggle to uphold and protect the country’s honour.

Prime Minister Narendra Modi paid his tribute to the freedom fighters on Shaheed Diwas. “Salutations to the revolutionaries of independence, ”Amar Shaheed Veer” Bhagat Singh, Sukhdev and Rajguru on Martyrdom Day,” he wrote in Hindi.

PM Modi added, “The sacrifice of these great sons of ”Maa Bharati” will remain an inspiration for every generation of the country. Jai Hind.”

23rd March is a special day for us all as we observe Shaheed Diwas. At 6 PM tomorrow, will inaugurate the Biplobi Bharat Gallery at Victoria Memorial Hall, Kolkata via VC. It will showcase the contributions of those who devoted their lives for our freedom. https://t.co/DTu1bWR6mL pic.twitter.com/q7LX72WuCi

Bhagat Singh, Sukhdev and Rajguru joined the freedom struggle and wanted to avenge the death of Lala Lajpat Rai. The three young revolutionaries were arrested on various charges, including the murder of British police officer John Saunders in 1928. But they didn’t want to kill John Saunders. Their target was Superintendent of Police James Scott, who had ordered his men to lathi-charge protesters leading to the death of Lala Lajpat Rai.

Shaheed Diwas: What led to the hanging of Bhagat Singh, Rajguru and Sukhdev

India is observing ‘Shaheed Diwas’ today to mark the death anniversary of Bhagat Singh, Shivaram Hari Rajguru, and Sukhdev Thapar, the revolutionary leaders who were hanged at the Lahore Central Jail in Lahore on March 23, 1931.

Bhagat Singh, the charismatic socialist freedom fighter, was born in Banga village of Faisalabad district (previously called Lyallpur), now in Pakistan’s Punjab province, in 1907. His two acts of violence against the Britishers and subsequent executive at the age of 23 made him a folk hero of the Indian independence movement.

Singh became actively involved in India’s freedom movement at an early age after quitting formal education at the age of thirteen. He left home for Kanpur after his parents tried to get him married.

In December 1928, Bhagat Singh, Sukhdev, and Rajguru plotted the assassination of the superintendent of police James Scott in Lahore to avenge the death of Lala Lajpat Rai, the nationalist leader of the famous Lal-Bal-Pal trio. In a case of mistaken identity, assistant superintendent of police John Saunders was shot dead. To avoid arrest, Singh escaped to Calcutta after shaving his beard and cutting his hair. 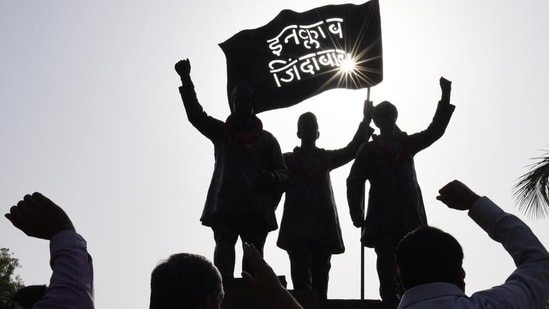 In April 1929, Singh and Batukeshwar Dutt hurled bombs in the Central Assembly Hall in Delhi, and raised the slogan of “Inquilab Zindabad!”. They were later arrested. Singh and his revolutionary comrades Rajguru and Sukhdev were hanged to death on March 23, 1931, in the Lahore Conspiracy case.

Several events have been organized by central and state governments to pay tribute to the revolutionary leaders of the Indian independence struggle. Punjab chief minister Bhagwant Mann declared a holiday on March 23, saying the decision was taken to enable the maximum number of people from across the state to pay their tributes to the great martyrs at Khatkar Kalan and Hussainiwala.

Delhi chief minister Arvind Kejriwal announced that his government’s upcoming school to prepare students for the armed forces will be named after Bhagat Singh. The school will come up at a 14-acre campus in Jharoda Kalan with state-of-the-art facilities.